Thoughts on after-eclipse travel in Chile

This section is in response to questions on eclipse forums about what possibilities exist for travel in Chile after (or before) the eclipse.  It is hardly exhaustive, and we focus only on some possibilities that won’t easily be found by perusing travel books or the internet.  As we have been to Chile a few times, intent on exploring the natural landscapes, some of the ideas here might be useful to some the eclipse-goers who have both some extra time and interest in various natural history subjects besides astronomy.

A kmz file suitable for display in Google Earth provides some of the more interesting localities that we remember (download the file and open with Google Earth…also use Google Street View).  A general Google Maps route from La Serena to San Pedro de Atacama is shown below: 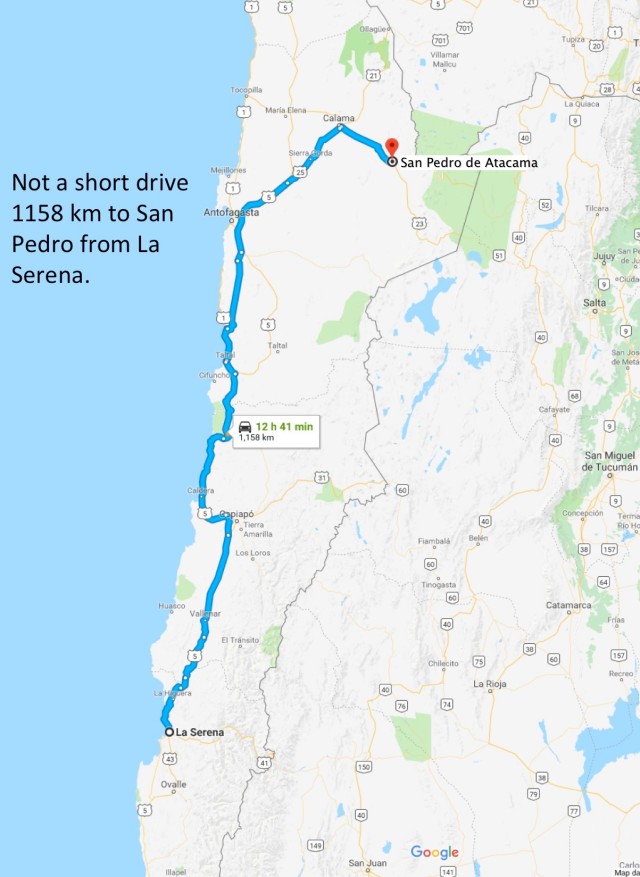 A logical question first question might be:   Should you travel south or north after the eclipse – if you plan to see some of Chile during your visit.  Ask almost any Chilean and they will say go south – it rains more in the south, there are forests and snow-capped volcanoes and scenic lakes.  In keeping with our website’s focus on the traveling naturalist, we describe our perspectives – they differ from the consensus.

While the south of Chile has many interesting features for the naturalist, it is not really a winter destination.  Cold, wet weather along the coast and snow at higher elevations inland is similar to the US Pacific Northwest in winter.  Although there are forests in the south, a great part of the easily accessible landscape has been deforested for agriculture and truly pristine forests are in areas that are much farther south or of difficult access.

The “north” – anything north of La Serena, is dry.  And along much of the Pan-American Highway route, from about Copiapo to the Peruvian border (and from there to almost the border with Ecuador) is what they call “hyper-arid” with almost no rain.  So what is the attraction?  The dry environment is the attraction.  The main process modifying the Earth’s surface almost everywhere is running water, except in the driest parts of the Atacama desert.  On large stretches of northern Chile and Peru there is almost no measurable rainfall, and wind erosion by sand grains lifted by the wind are main source of erosion.

So being desert-lovers, we would urge post-eclipse travelers to head north to expand your geographical perspectives.  Here are our main reasons for doing so:

1)  The north of Chile has some of the best volcanic landforms you are likely to see anywhere on Earth.  This is because the precipitation is very low in the higher Andes and erosion by water and ice is minimal compared with volcanic regions in moister climates.

Volcanoes along the southern Andes.  Yellow triangles are Holocene age (last 11,600 years) and slightly older ones are the blue triangles (Pleistocene – up to 2.5 million years old).  Many more volcanic features are obvious from the Google Earth imagery but are somewhat older.  Note the eclipse totality path passes in a gap between the volcanic regions of the Andes.  You won’t see and Chilean volcanoes unless you travel north or south! 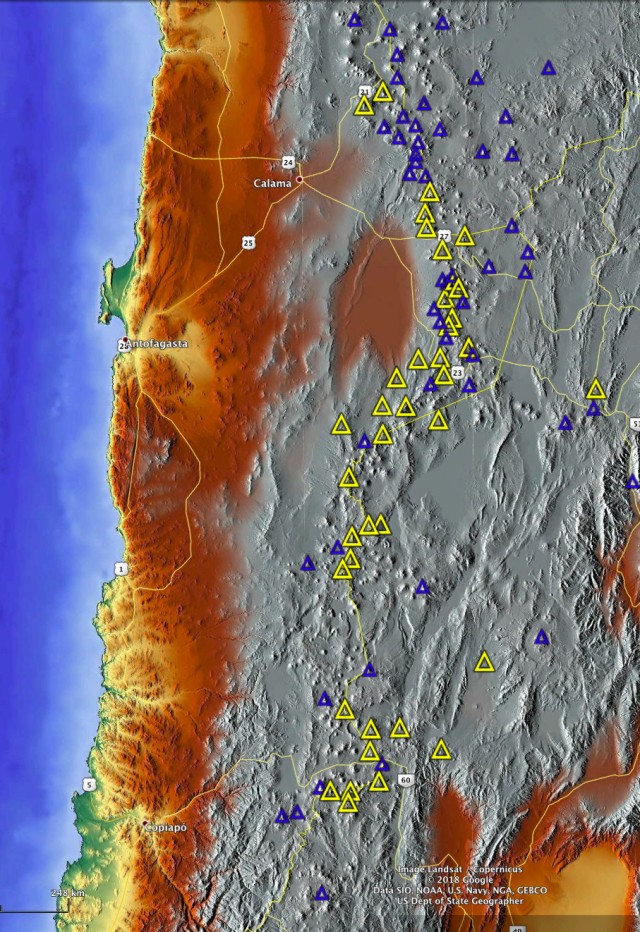 Same as previous image but a closer view of the Calama and San Pedro de Atacama (not shown but SE of Calama) area.  You can visit the volcanic areas by ascending a very long paved/graded road from Copiapo or more easily via either Calama or San Pedro via paved roads.  There are no places to stay on the pass from Copiapo to Argentina so this makes for a very long day. 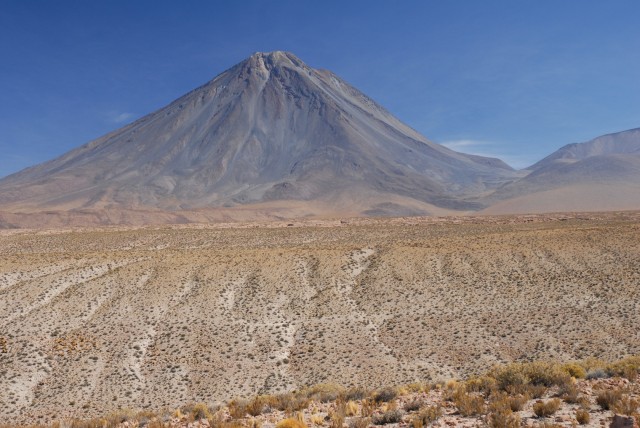 Licancabur volcano and the terrain surrounding it.  Note the vegetation – this is near 12000 ft elevation.  Rain occurs here during the summer period (Nov-April); they also get some winter snow. 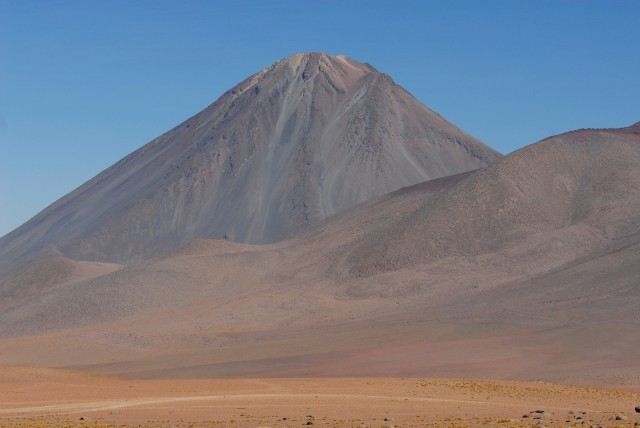 Another view of Licancabur Volcano from the road east of San Pedro de Atacama.

2)  The high altitude Andean salares (salt flats) and associated saline lakes and bofedales (high altitude wetlands)  have a unique fauna – including several flamingo species, a giant Andean Coot and Rheas.  These are areas where you will also see Guanacos and Vicuñas – the native cameloids of South America.  (Guanacos range down to sea level along the coast but the Vicuñas are strictly high altitude animals. 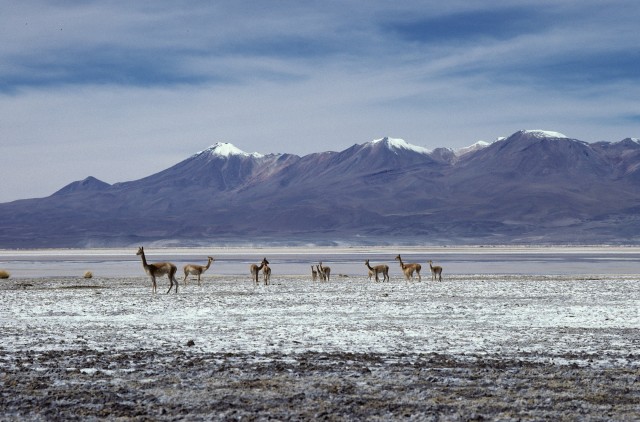 A salar with vicuña present and volcanoes in the background. 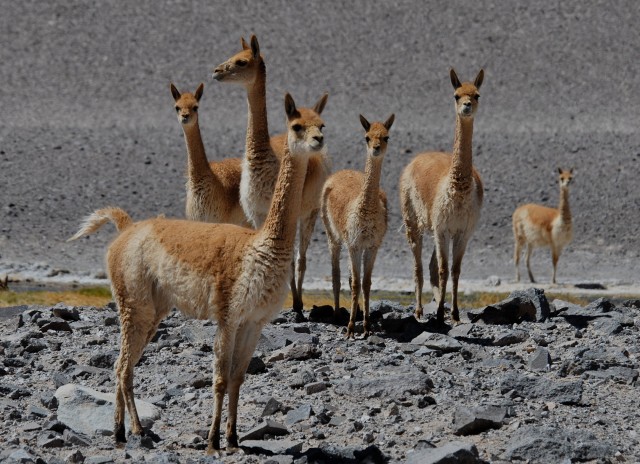 Vicuñas showing curiosity (they are usually protected from hunting). These are only found above 3000 m. 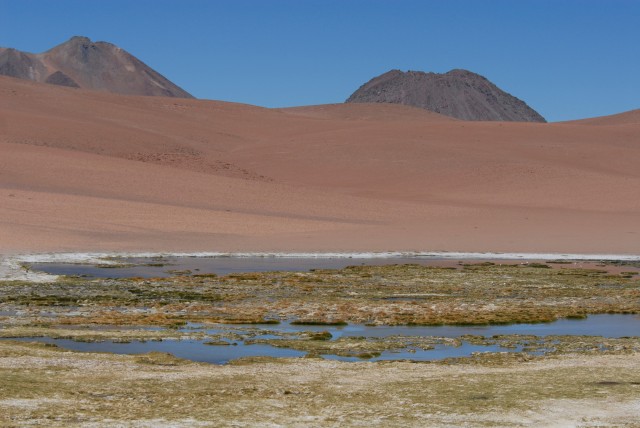 A bofedal – a high altitude marsh dependent on melting winter snow or groundwater seepage. Usually these are saline, but are areas frequented by guanacos and vicuñas, Andean coots and flamingos also occur here. 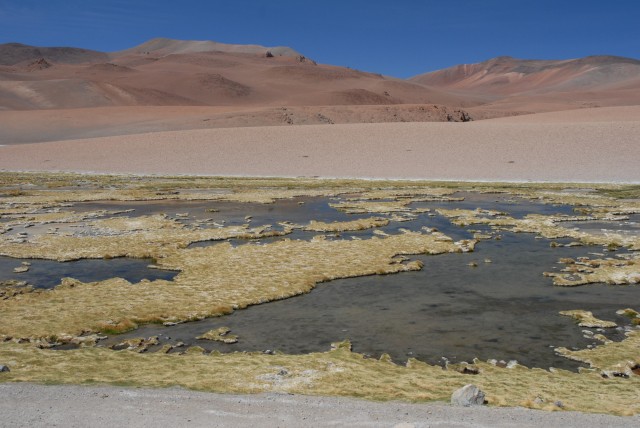 Another view of a bofedal. 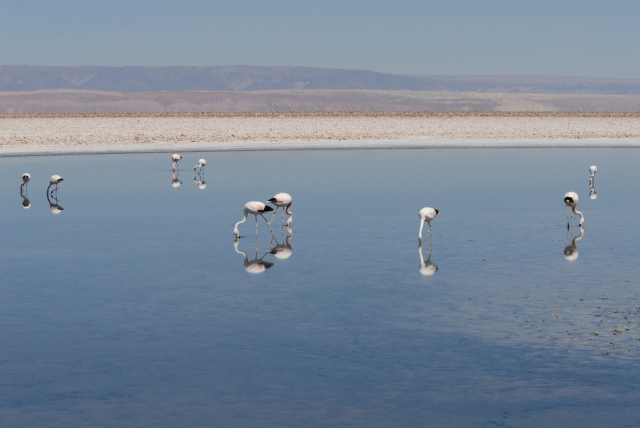 Flamingos are often abundant in the salares. There are two species that are common. This is near San Pedro de Atacama. A relatively low salar at only about 8000 ft elevation – most are 12,000-14000 ft. 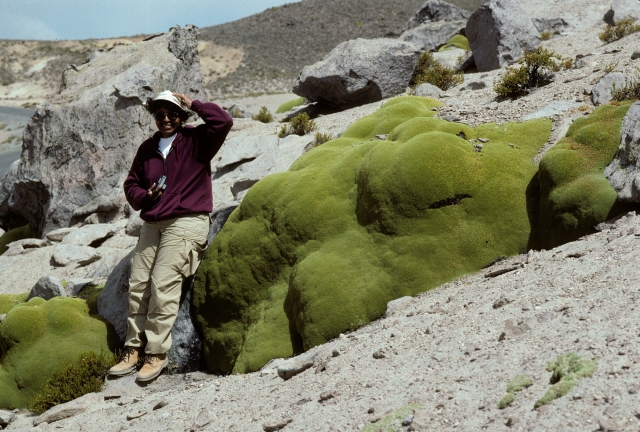 Yareta (Azorella compacta) are high-altitude plants of the Umbelliferae family that grow into a hard mound.  The yellow flowers are very small.  They can be hundreds of years old – or more. 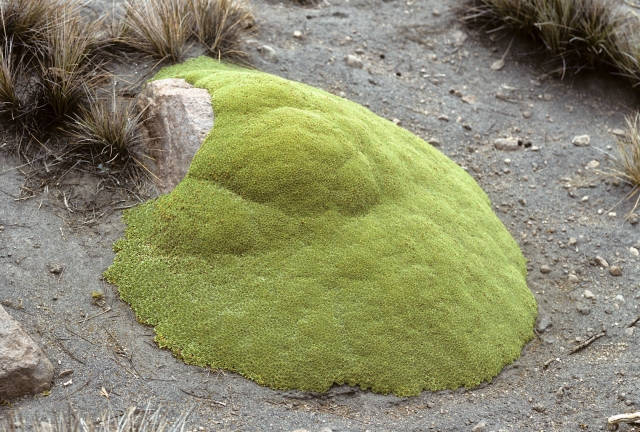 Closer view of a Yareta.  Unfortunately, to see good examples of these plants (and many other interesting plants) you need to travel farther north to Lauca National Park – just uphill from Arica, Chile….14,000 ft uphill!

Yareta (Azorella compacta) are high-altitude plants of the Umbelliferae family that grow into a hard mound.  The yellow flowers are very small.

3)  The Atacama desert (lower than the high Andes but above the coastal low cloud zone) is the driest region on Earth.  Here wind and sandblasting are the dominant erosion processes.  Most places have no visible vegetation and gulleys formed by running water are not visible.  Huge areas are covered by sandblasted stones known as ventifacts. 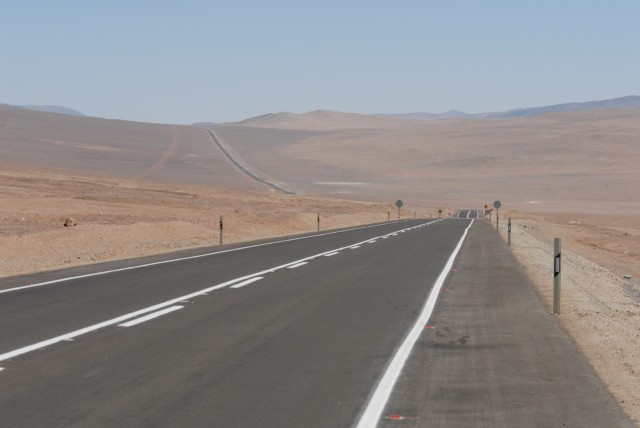 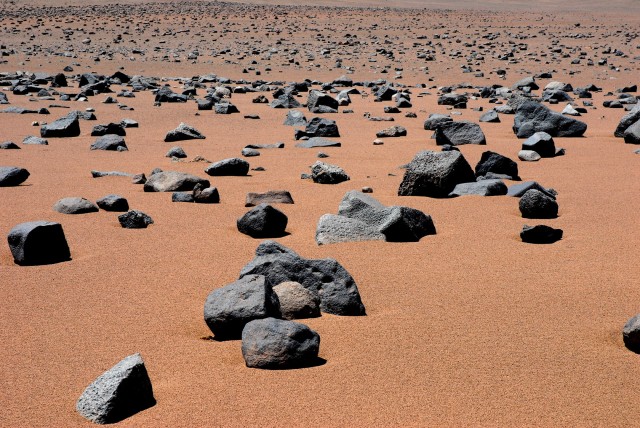 Top of a ventifact 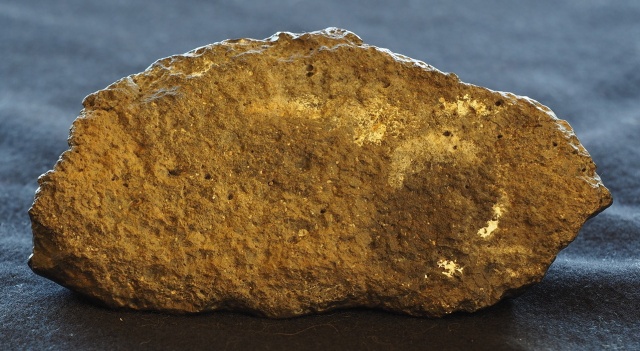 bottom of the same ventifact – no sand erosion occurs on the bottom indicating the rock hasn’t overturned in a long time.

4)  The transition region from the moist part of central Chile (roughly from Santiago and Viña del Mar southward) to the dry north is similar to regions along the California/Baja California coast, the Cape Town to Namibia transition, or the Southwest Australia regional transition.  The vegetation is a mix of shrubs, succulents and bulbs (during the wet season) with many fascinating species.  Cacti, terrestrial bromeliads and even a native Palm (Jubaea chilensis in La Campana National Park (sadly, their website is poorly designed and “bureaucratic” – like those of many government agencies in Latin America) occur in central Chile, all thinning out as one proceeds north. 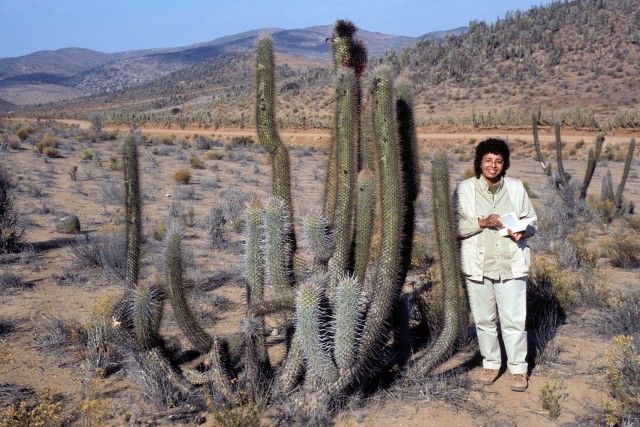 A tall Echinopsis chilensis cactus dominates the landscape near La Serena.  To the south there are more shrubs, to the north less.  This cactus is not found much farther north.

5)  Last, but certainly not least, is the unique fog-dependent ecosystem that hugs the coast from near La Serena, extending all the way to northern Peru.  The impact of the clouds depends on the local topography, but can be dramatic and produces localized fog-induced forests like those in Fry Jorge National Park, just south of La Serena, to hilltops in Pan de Azucar National Park just north of Chañaral.  Many other (mostly inaccessible) hillsides are covered with vegetation along the coast towards Peru.  In extreme northern Chile and along much of the Peruvian coast there are bromeliad mats – sometimes kilometers across, that exist only on this fog moisture. 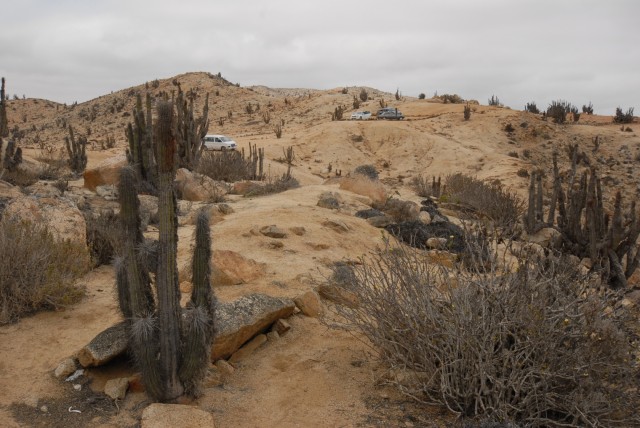 At the Pan de Azucar lookout.  Plants here have a heavy covering of lichens. 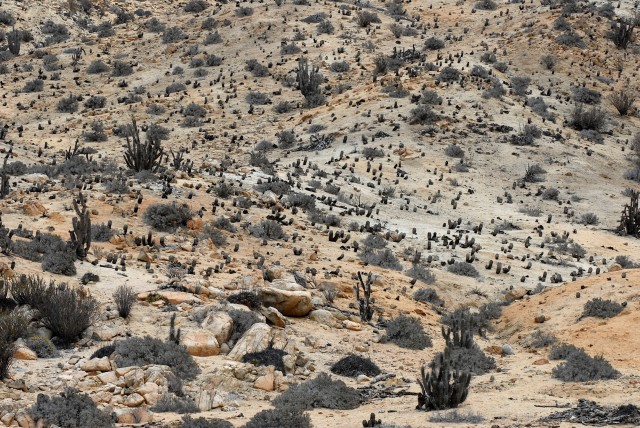 A dense concentration of the endemic cactus Copiapoa cinerea together with taller Eulychnia cactus. 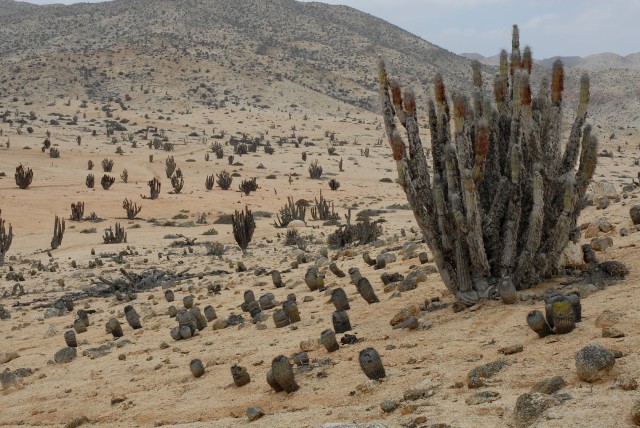 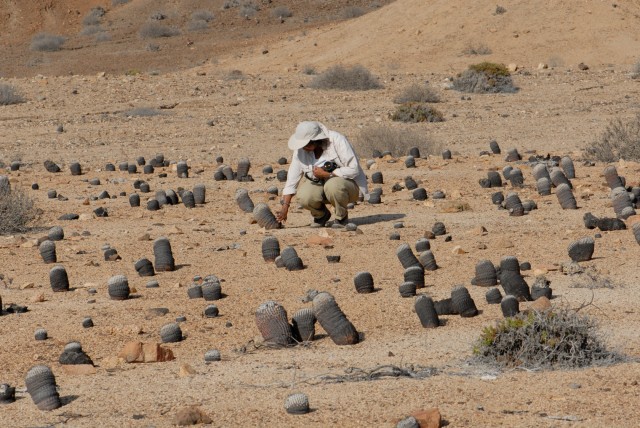 In summary, we recommend the route shown below for the region between Chañaral and the Antofagasta area.  Note that if you are going to San Pedro de Atacama or thereabouts you don’t need to enter Antofagasta – you stay at a few thousand feet elevation and bypass the city.

And, a final comment:  July will be low season for Chilean travelers – at least to the North.  So almost anywhere you might want to go north of the eclipse path should not be crowded – once the surge of Chilean eclipse-watchers from the northern cities like Antofagasta, Iquique and Arica return home.   These locals will probably not spend much time seeing the areas we focus on here – since they prefer to travel during the warmer time of the year. 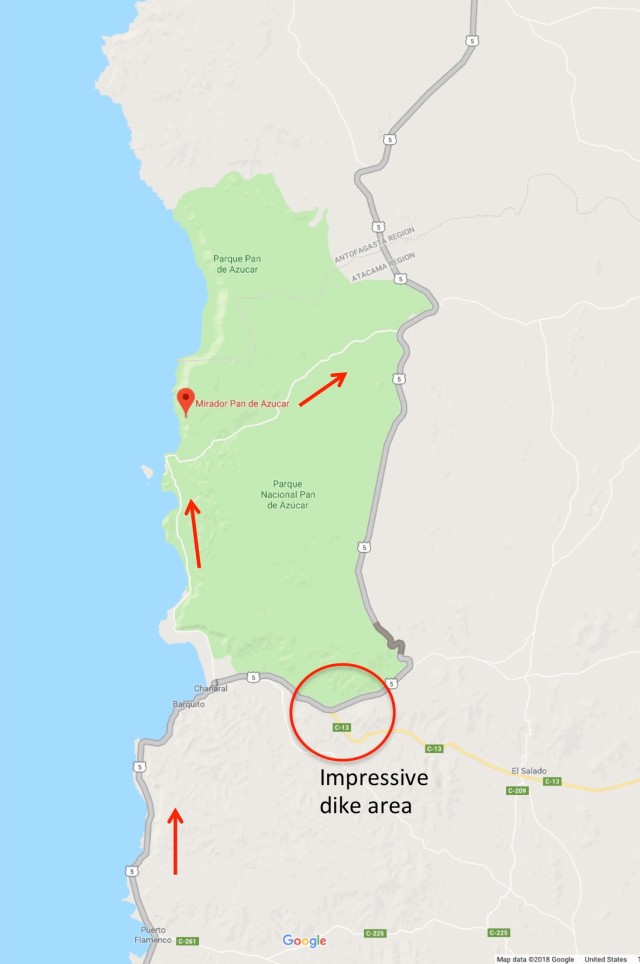 Google Maps view of the Pan de Azucar National Park area. The red arrows indicate our suggested route through the park on the way north. You might go to the circled area to see the igneous dikes that are a few miles out of town. Be sure to go to the Mirador/lookout (side dirt road suitable for standard cars) 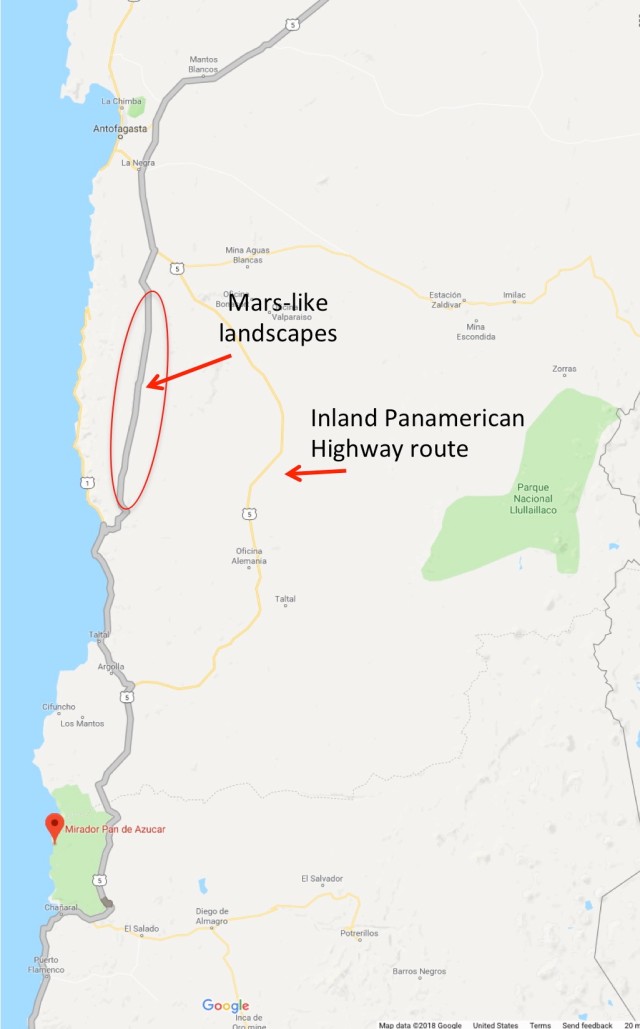 Map showing the interesting area of “Martian landscape” stretch of road (there are many others in the Atacama. This road is paved, as is the Pan American Highway (farther inland).  The coastal towns of Chañaral and Taltal have hotels, as does Copiapo and Vallenar (off this map, farther south).