Climate of the Canary Islands

The climate of the Canary Islands is interesting.  It is a Mediterranean climate, with cool season rain and dry summers.  However, the ocean temperature is moderate all year (means range from 19-23˚C), especially in summer (around 23˚C) due to upwelling along the African coast and thus the sea level temperatures in the Canaries are cool by comparison with climates in the eastern Mediterranean where the sea temperature reaches values near 28˚C or higher by late summer.  The Canary Island climate is much closer to the climate of Southern California – where the water temperature never gets much higher than about 22˚C. 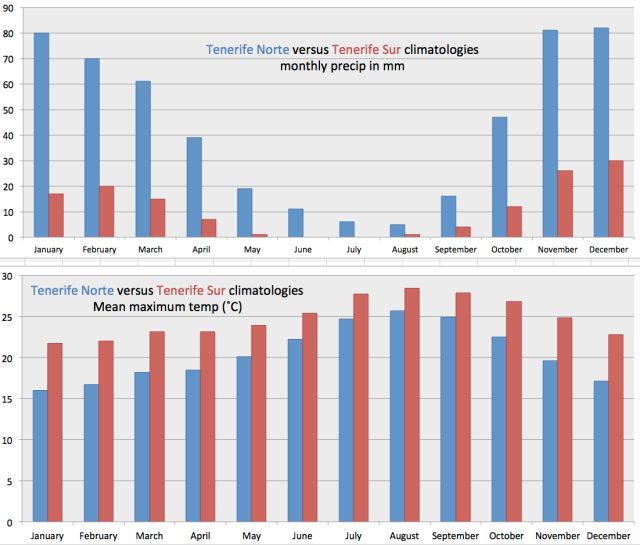 Monthly mean precipitation (above) and maximum and maximum temperatures (below) for two stations on Tenerife.  Tenerife Norte is at the old airport in the town of Santa Cruz de Tenerife and Tenerife Sur is the southern airport location closer to the touristic resorts on the southwestern side of the island.  The main feature of the precipitation data is the maximum rain occurs in winter and very little fallsin summer.  Note the lower precipitation and higher temperatures on the lee side site (Tenerife Sur).  There is a small altitude effect hidden here – the northern site is higher than the southern side and this accounts for some, but not all, of the temperature difference.

A basic reference for the Canary Island climate can be seen at the AEMET (Agencia Estatal de Meteorologia) website.  An atlas specific to the Canary Islands is here.  The pdf of the Atlas can be downloaded here.

Some general info and other climate about the Canary Island climate can be found here.

Mean annual precipitation for the various Canary Islands from the AEMET (Agencia Estatal de Meteorologia – Spanish Met Service) climatology document.  Easternmost three islands are shown below the western four islands to save space.  However, the relative sizes of the islands is correct  (note graphic scale of 30 km).

Now for some key climatic details

While the basic climatic information for the Canary Islands can be found on innumerable touristic websites, a few details shown in this section will be shown on none of them.  But they are important.  They relate to the climatology of cloudiness on the islands.

By using daily satellite imagery from certain polar orbiting satellites (NASA Aqua and Terra) one can extract the daily cloudiness and then average these daily values into monthly , annual and multi-annual averages.  Here we will show only the multi-year averages because most months and years look similar.  The satellites have a pixel resolution of 250m, not nearly as high as the imagery from Google Earth but the highest available for daily coverage of the Earth. Figure cc below shows a multi-year average cloudiness (around mid-day) for the entire Canary Islands.  Fig dd shows climatologies for individual islands and a series of slides showing overlays and comparisons with the relief on the various islands is here.

Why is the cloudiness in the Canary Islands important?  It is important because clouds determine where the laurisilva forest occurs.  (On a practical manner to the islands – it determines where the main touristic resorts are situated.)  Without cloud-impacted landscapes and fog drip there would be no really wet environments on the Canary Islands.  The low islands of Fuerteventura and Lanzarote, not extending into the low cloud layer for the most part, lack these moist environments.

The low stratus clouds are much more numerous in the immediate upstream of the Canary islands that have terrain that extends high enough to block the trade wind flow.  The low islands of Lanzarote and Fuerteventura don’t show this blocking for the most part. Only the high narrow ridge on the extreme south of Fuerteventura is high enough to produce a very distinct maxima in cloudiness – this area is only accessible via walking.

The western Canary Islands, with distinct maxima in cloudiness on their upwind sides, have moist laurisilva forests from cloud base up to the average height of the trade wind inversion, at approximately 1200-1500m. On individual days this can be a very distinct boundary between dry air above the inversion and cloudy conditions below, but because this varies somewhat both diurnally and also on a daily basis the transition between laurisilva forest and drier conditions higher up is not quite as sharp as seen in the meteorological conditions at any particular time.

back to Canary Islands home