We left the hotel at 8 am and returned 2 km to a side road we had passed the previous day.  This area, although disturbed and more populated, had some mature specimens of Pachypodium geayi.  In this area we also saw Euphorbia stenoclada and Cynanchum perrieri.

10.109  Our first stop, although somewhat disturbed,  had some remnants of dry/spiny forest.

10.110 This was a busy area with no shortage of people coming by. 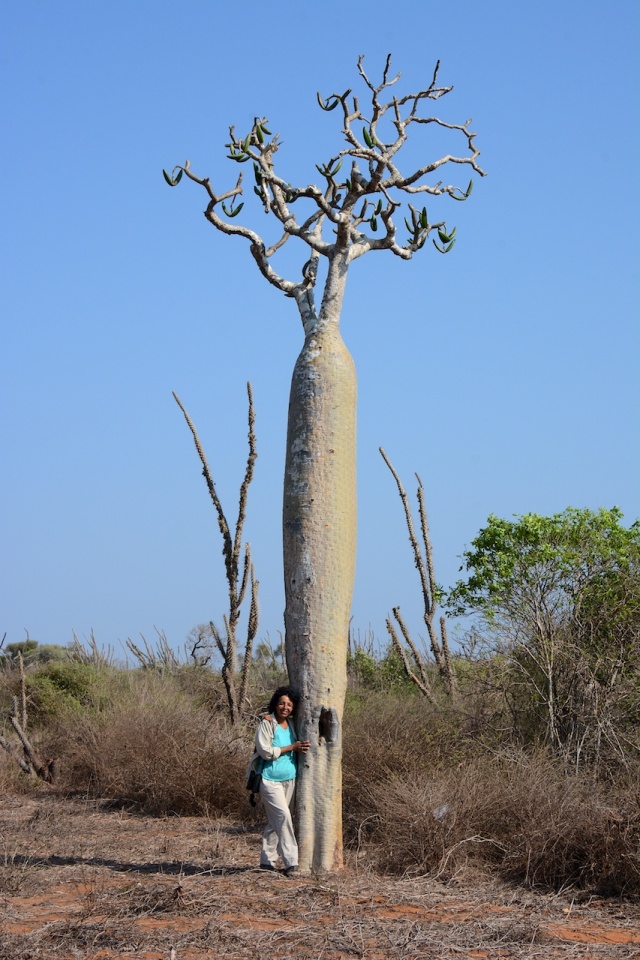 Although the surroundings were quite disturbed there were some very large specimens of Pachypodium geayi.

10.113  Tombs. Note the planted Pachypodium near the graves.

A few more photos of this area of disturbed dry/spiny forest can be seen here. 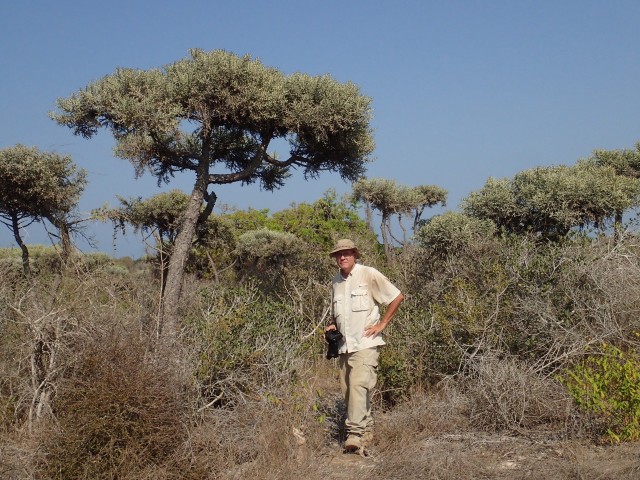 Our first stop of the day around 9:25 am was at the private Reniala Reserve (the name means mother of the forest).  This reserve had a number of nice trails and many succulents including Adansonia rubristipa, Aloes, Adenia sp., Comyphora, Cynanchums, Delonyx decaryi, Pachypodium geayi and miscellaneous Euphorbias and there were labels in many of the plants.   As in all reserves and parks in Madagascar we needed a local guide to walk the trail.  We were not the only tour group visiting but in spite of that the walk was a refreshing change to being in the car hour after hour.  We even spotted some nice birds such as the Crested and Cocquerel couas and the Madagascar Green Sunbird.

10.115  Arriving at the private Reniala Reserve. 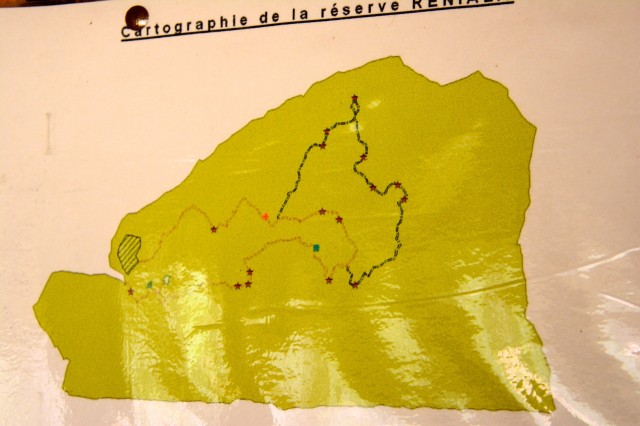 10.120  We probably saw more lizards than any other animal in Madagascar.  They were here too.

10.121  Mike next to a large Adansonia rubristipa. 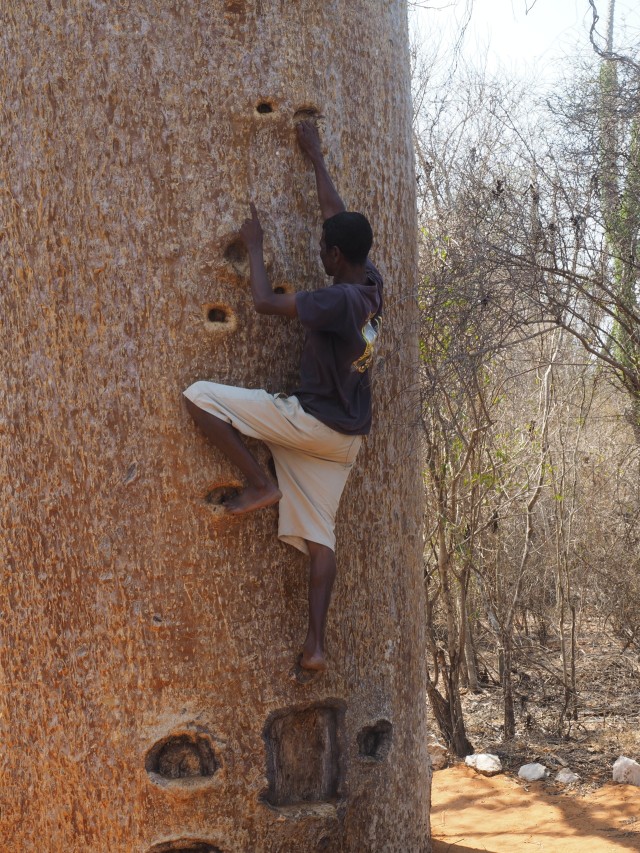 10.123  Clovis demonstrating how the locals climb the baobabs to get to the honey. 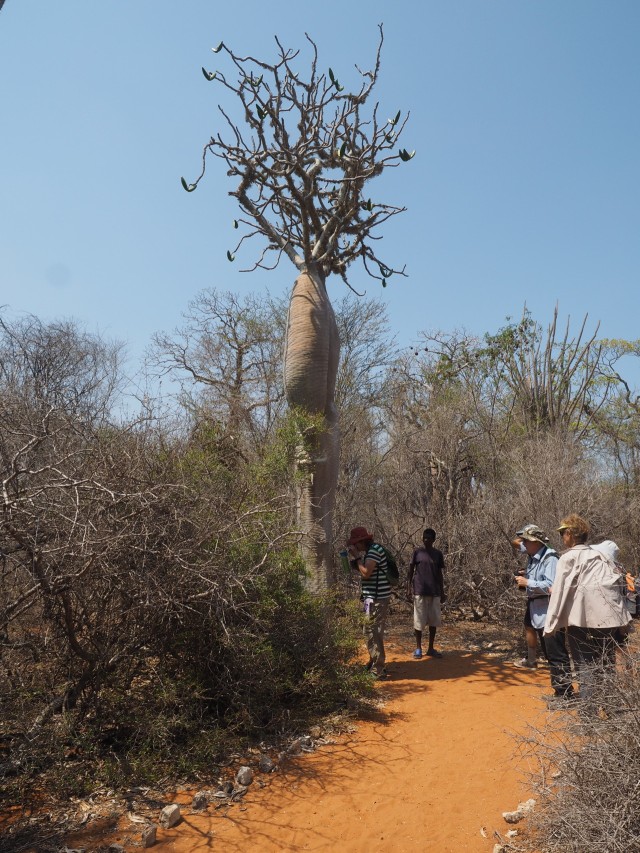 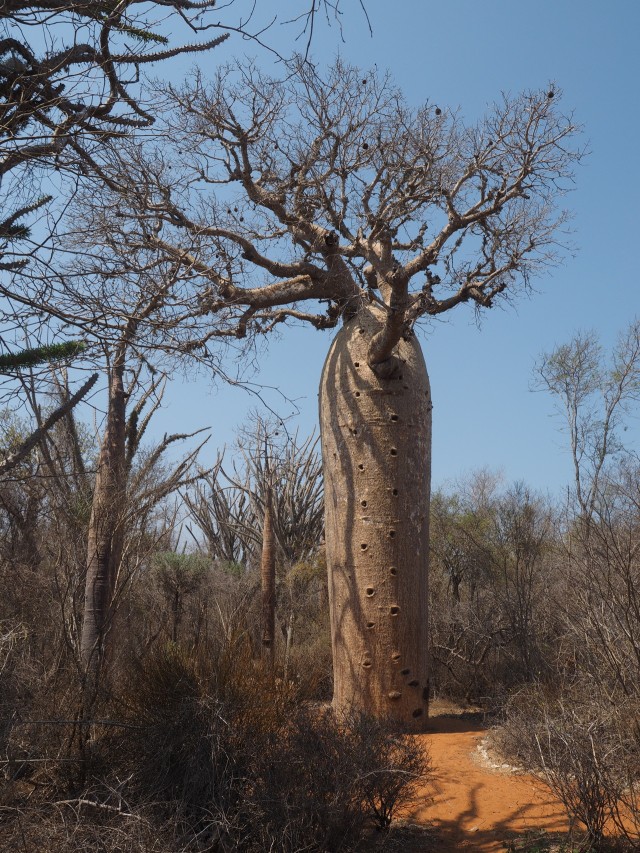 10.125  Another view of Adansonia rubristipa also known as “Fony”.

10.127  Didierea madagascariensis by now the reader should realize that this species is a dominant of the spiny forest of Madagascar.

An interesting insect spotted along the trail were the nymphs of the flatid leaf bugs nymphs.  Leaf bugs or plant hoppers belong to the order Hemiptera and are members of the Flatidae family.  The adults are pink and look very different from the nymphs.  The waxy substances protruding out of the nymph’s abdomen are believed to protect them from avian predators. 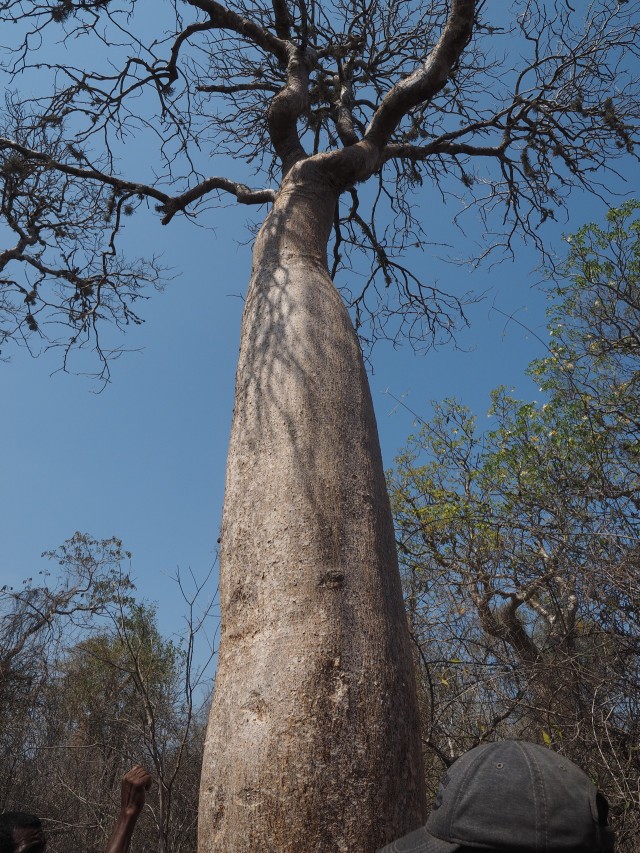 10.131  Delonix decaryi, a thick-trunked short tree of the dry/spiny forest.  This genus belongs to the Fabaceae family.

10.134  Our group on the trail.  You can get an idea of the height of the forest trees.  The coastal plain was very sandy – no obvious rock outcrops. 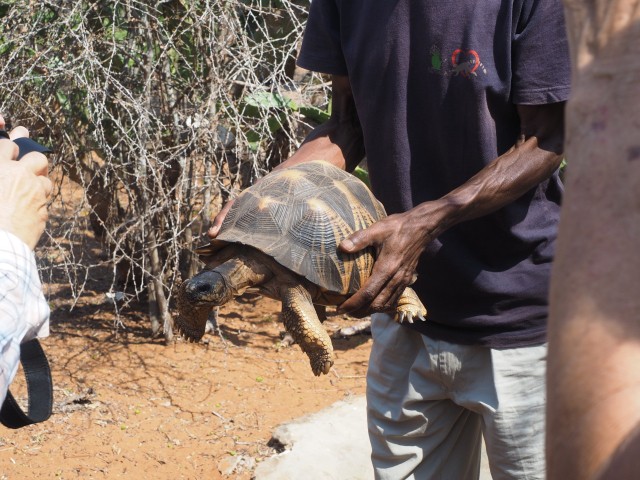 10.137  The concave underside would indicate this is a male.

At the entrance to Reniala were vendors selling crafts.  Unfortunately asking even one question or looking at a craft to long would generate non-stop attempts to sell you the craft.

10.139  Google Earth view of the area of the Reniala Reserve.  Blue pins are photo locations, agriculture or disturbance is light-colored land, mostly near ocean. View is about 10.5 miles across. 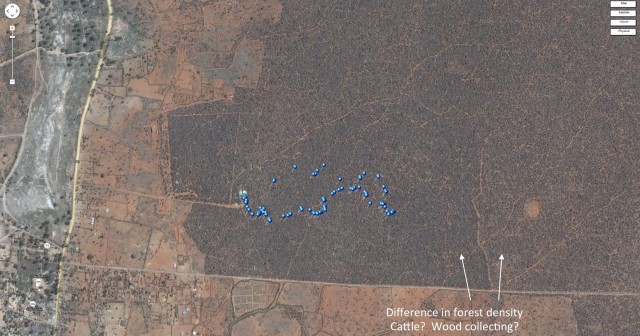 10.140  Closer view of the reserve with our walk now depicted by blue pins (photo locations from Nikon GPS).  Note that there are many trails through the forest and some boundaries between denser/darker forest and lighter forest.  Is this due to wood cutting or collection?  This view is about 1.45 miles across.

10.141   A closer view of our trail through the reserve.  Apparently there are many other trails as well.

By 11:20 and after some brief shopping we were off to our next stop of the day, the Antsokay Arboretum.

On arrival to the arboretum we had a nice lunch.  The arboretum turned out to be very nice and unlike the Reniala reserve we saw very few tourists.   Clean bathrooms, a gift shop and a very nice restaurant were a welcome treat.  After lunch we visited the shop and started our 2-hour guided walk of the arboretum.  It was a nice place to walk, though at the guide’s pace, and to see a variety of plants including succulents.  We saw some birds like Crested Drongos, Green-Capped Coua, and sunbirds.  We also saw a small lemur, some lizards, a warty chameleon and flatid leaf bugs.  Warty chameleons (Furcifer verrucosus) are endemic to Madagascar and are found primarily in the drier western part of the island.

10.143  Google Earth view of the arboretum and GPS-photo locations.  The arboretum is mostly natural vegetation – but is surrounded by disturbed lands.  The main, paved highway is at top. 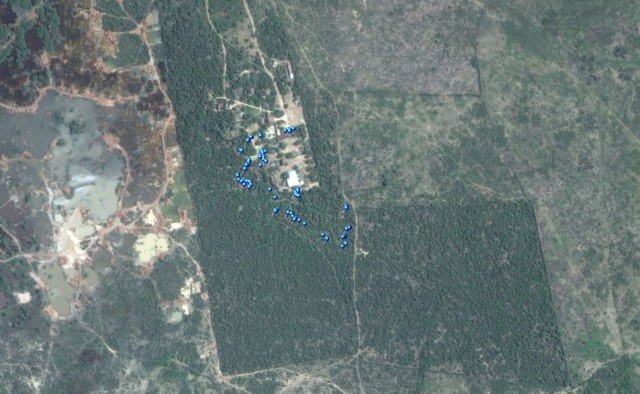 10.145b  Alluaudia procera.  Sadly, we did not see this species in habitat – it occurs farther south. 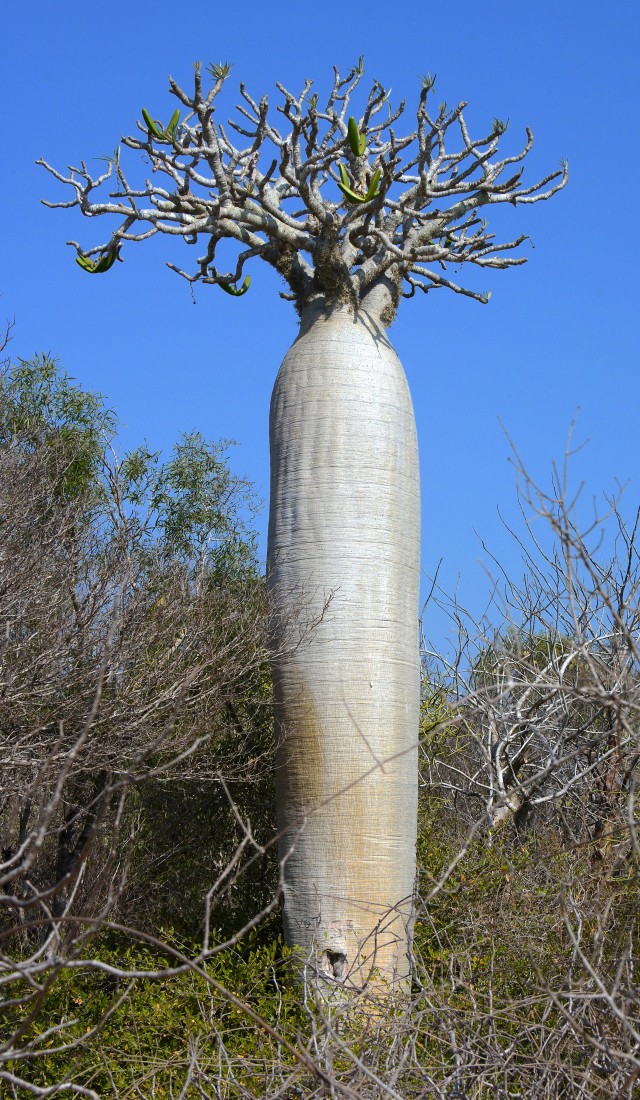 The arboretum had a very nice specimen of Pachypodium geayi, here with fruits.

10.145 There were signs with interesting information along the trail.  We think this is Euphorbia leucodendron but are not sure.

This is probably the Gecko Phelsuma mutabilis; see http://www.inaturalist.org/taxa/Phelsuma_mutabilis

10.147   Presumably, the enormous tuber is underground under normal conditions.

10.147  A Coquerel’s  Coua  (Coua coquereli)  wandering in the underbrush near the trail.  In the cuckoo family, this genus is endemic to Madagascar.

Near the end of the tour we visited a tortoise enclosure where we were able to observe very young radiated tortoises.   It is amazing to hear how long it takes tortoises to reach adult size. They breed them at the botanical garden and I understood that they are released in the wild later on.    We did not see any tortoises during our travels and perhaps a combination of habitat destruction, poaching and the fact that locals eat them may be the reason for that or maybe they were aestivating since we were there near the end of the dry season.  You can read more about the plight of the radiated tortoise here. 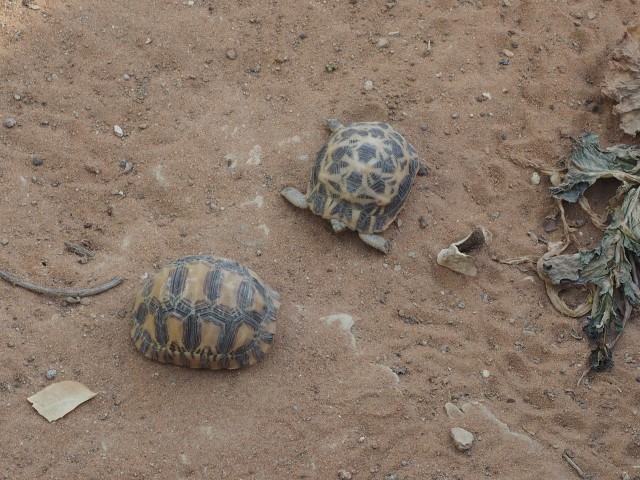 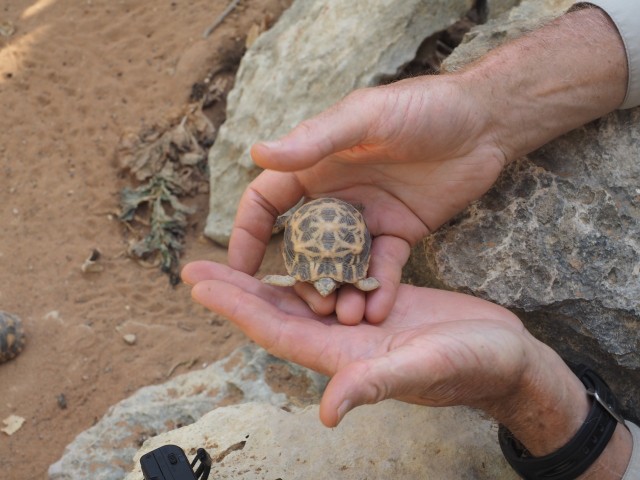 A small museum had some interesting posters about Madagascar habitats and animals. 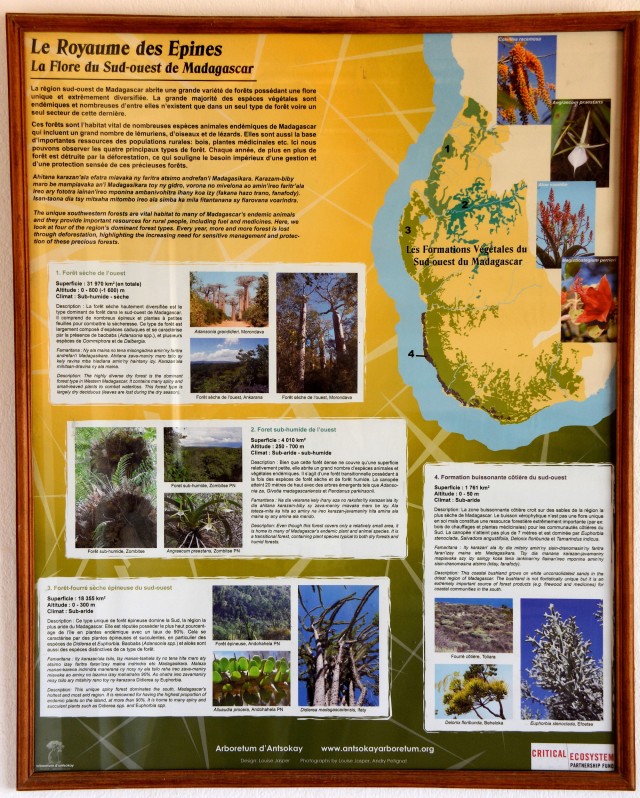 10.156  Size differences between man and the different ratites (flightless birds).  The Elephant Bird and the Moa, first  and second from left to right, are now extinct. The rest are the Ostrich, Emu, Cassowary and the Rhea.

So finally we all enjoyed a better day with less time on the road and more time walking on trails in interesting locations and a good lunch.  By 4 pm we were arriving at our hotel Le Caliente Beach south of Tulear.  We were welcomed with cocktails and promptly given the keys to our room.   Prior to letting us go the owner took our orders for dinner.   Today we had enough time for a nice swim at one of the 2 pools available to guests and we were able to enjoy a lovely sunset over the ocean from the pool.

That night at dinner we were informed by TV of the plan for the next day.   We were supposed to spend only one night at this hotel and the next day we were supposed to head south and spend the night at a different location.  The tour operator had just today found out that there was no road to get to the hotel further south by land.  A ferry would be required and apparently the expense and hassle of doing this just for one night convinced him to abandon that plan.  So in the end the tour operator decided it would be two nights at  Le Caliente Beach hotel instead of one.

Since there was only an improvised plan suggested at dinner for a morning outing to a route we would see the following day, we decided to stay at the hotel.  Finally a down day, what a welcome development!   While I was very happy to have the two nights at Le Caliente beach I was also curious to know why the tour operator had planned to go further south in the first place and just for one night.  I wanted to know what we were missing by not going further south, but I did not feel like asking too many questions at this point so I never found out.

Later that night we went out with a flashlight to explore the hotel grounds and we saw a Madagascar nightjar and Brown and Grey Mouse Lemurs.  The lemurs were tiny and super active, constantly moving around in the shrubs.  Their bright eye shine made them easy to spot.  Also high up in a tree was a chameleon with a very long nose.

That night was one of the most restful nights I had experienced so far since the beginning of the tour.

Le Caliente Beach turned out to be one of my favorite hotels of the trip.  It was next to the ocean and there were large mangrove trees clustering in areas near the shore.  The beach was clean of trash and it made for pleasant walking.  The beach turned out to be a busy freeway of sorts for the locals.  Very early in the morning one could hear people walking on the beach in front of the hotel.  Later that morning I heard and saw children going to school.  Another bonus of the mangrove trees was the bee-eaters.  I spent some time enjoying the flying antiques of a pair that was using the branch of a large mangrove tree to hunt for insects.  It was mesmerizing to watch them go for the insects and then gracefully return to the branch.  Other birds we saw while walking at the beach were the Madagascar Magpie Robin, introduced Mina birds, and Namaqua Doves. 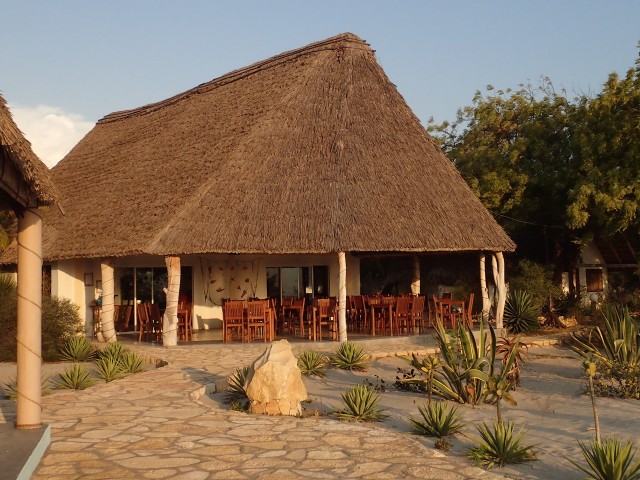 10.161  Our hotel – Caliente Beach, in center with the two pools.  Note the mangroves along the coast.  This coast is actually protected by a barrier reef a few miles offshore.

10.162  There were shoreline mangroves (Sonneratia alba) in front of our hotel.  These did not completely block the ocean view, but there was no real beach – at least at low tide.  Just mud flats covered by the mangrove’s pneumatophores.  Pneumatophores are aerial roots that grow up from the underground root system. 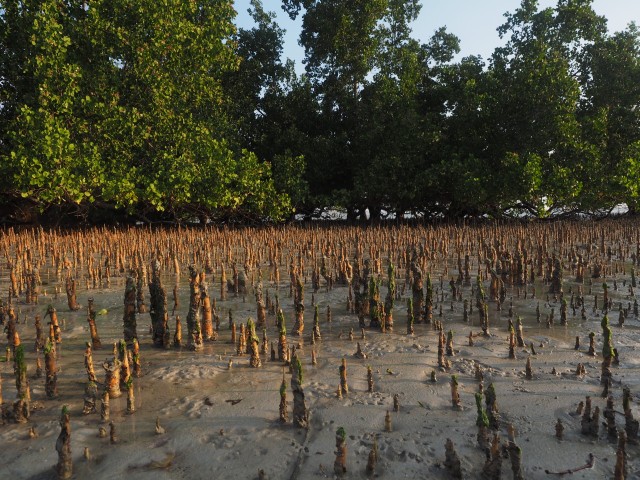 10.164  Rosario exploring the beach and the adjacent mangroves. 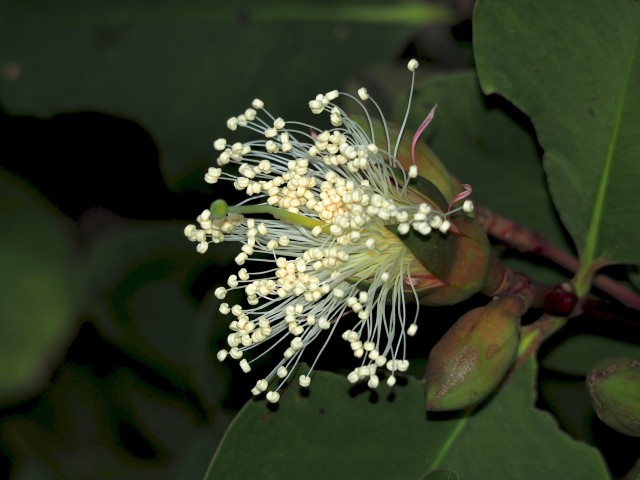 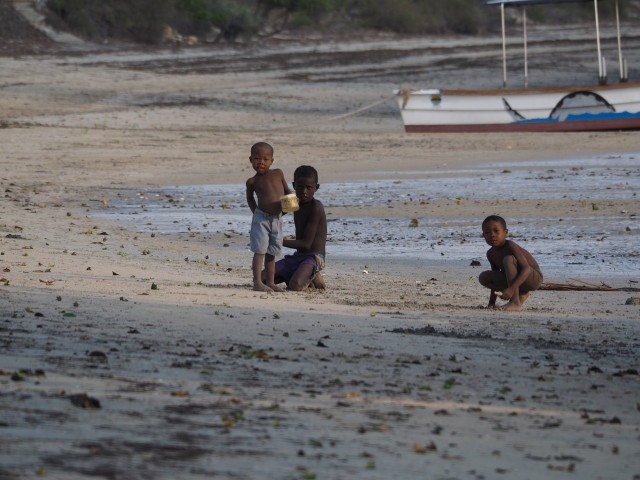 10.167  Kids playing on the beach.  As we approached them they asked for bonbons. 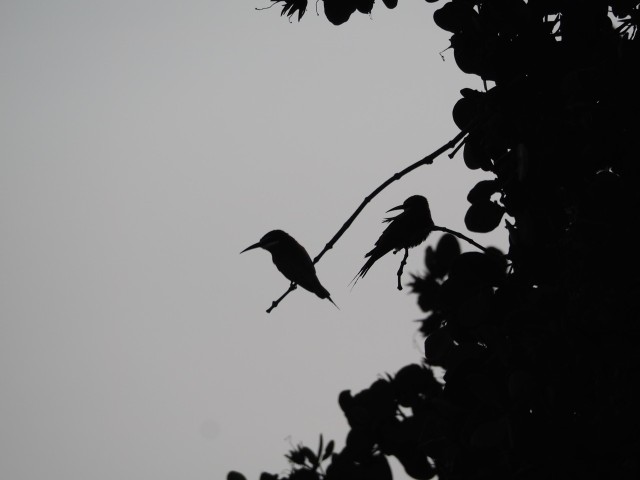 As we continued our leisure stroll on the beach we ran into this lively group of school girls.  I greeted them in French and they responded and even asked me my name.  They were full of life and energy.

10.170 We exchanged goodbyes in French with the lively school girls. It was nice to see children going to school.

The hotel did not have 24-hr electricity and they turn on the generator at night for 3 hours or so.  Otherwise they rely on solar energy.   They have a small shop where I was able to find some nice crafts to take home.  We were the only people staying at this relatively small hotel owned by French expatriates, as is the case with many hotels in Madagascar.

It was nice not to have to move on to another hotel, although we learned later while in Tana, that by not going farther south we might have missed good examples of spiny forest.   As it turns out we could have visited  Beza Mahafaly Reserve and its thorny forest which is about 60 miles off from the Tulear-Zombitse road.   The time at the hotel that day was well spent catching up with laundry, cleaning, repacking, checking emails, reading, bird watching, walking and swimming.   Part of the group went off on some exploration nearby but they were not gone for very long.

Later that afternoon we learned that the tour operator was upset because he had found out that the hotel he had reserved for the next to last day had cancelled his reservations. This seemed strange at the time, but later we learned that hotels tend to do this often in Madagascar.  They can give preferential treatment to local tour companies (unlike our tour company) they work with and who patronize their establishments during their tours.  Luckily, he found another place for our last night on the road before returning to Tana.

After another good dinner at the hotel we were off to bed.  The next day we would move on to our next destination leaving behind the South and its spiny forests.