The geology of the islands

One of the main attractions of naturalists to the Hawaiian Islands is to see active volcanism.  From early 1983 until 2018 there was almost continuous lava lake or fissure eruptions on the Big Island.  This was an unprecedented period of activity in recent history.  However, an eruptive phase in 2018 drained the Kilauea lava lake and magma chamber, leading to a major collapse of the Kilauea caldera and a cessation of activity.  Currently (Jan 2020) there are no volcanic eruptions occurring anywhere in the Hawaiian Islands.

The current lack of active volcanism doesn’t mean there isn’t a lack of interesting volcanic features to see in Hawaii.  In fact, one can justifiably argue that conditions are better now to see volcanic landscapes than during the active eruptions.  Why?  First, there are fewer prohibited zones where you cannot walk, though some areas are still closed until trails and roads are rebuilt (if ever).  Second, VOG (volcanic gases – mainly sulfur dioxide) is no longer present in large quantities.  The air is finally clear after decades of poor air quality and poor visibility.

Note that the volcanos are not dead, not really even dormant.  To see this go to the Earthquake page of the Hawaii Volcano Observatory (HVO), which displays weaker earthquakes than the main USGS Earthquake page.  There are frequent (mostly undetectable by people) earthquakes below the summit of Mauna Loa and Kilauea and a few other locations.  These reflect magma adjustments below the volcanoes.

Recent (historical) lava flows on Hawaii and Maui. Contours are every 500m; recent flows above 3000 m on Mauna Loa are not shown.

A detailed geologic map of the Big Island prepared by the National Park Service. There are subtle differences in the basaltic lava composition and ages.  Also, various eruptive centers like rifts and cinder cones are shown.

A US Geological Survey brief summary of the 2018 Kilauea eruption is found here.

Mauna Loa on horizon as seen from one of the Kilauea Iki lookouts.  The very gradual slope of Mauna Loa is due to the low viscosity of most of the lava when they were erupted. 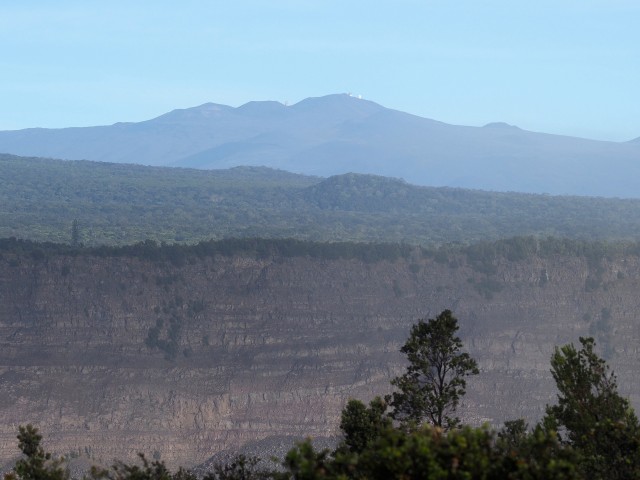 Mauna Kea in distance, with part of the caldera wall of Kilauea in the foreground.  A few observatory domes are visible – their altitude is about 13,700 ft (~4200 m). 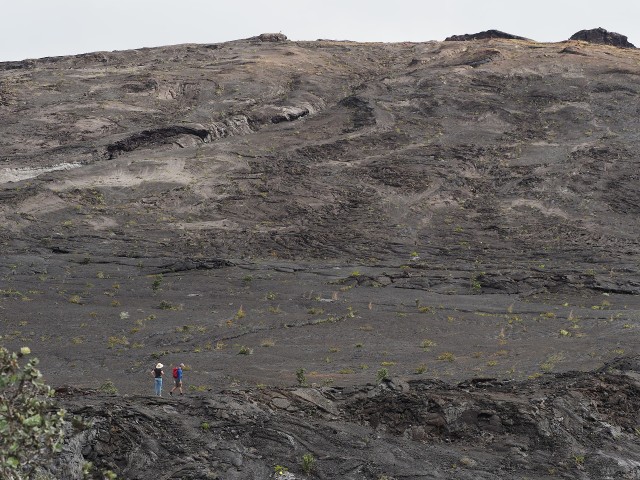 Mauna Ulu, a small lava shield that erupted from 1969-74 and you can hike (cross country on the lava) to the edge of the summit pit crater.

A fern growing out of a crack in pahoehoe on Mauna Loa.  Ferns – after lichens – are usually the first colonizers of recent lava flows.

The road up to the Mauna Loa climate observatory.  This telephoto shot exaggerates the undulations only slightly.  It is about 1 and a half cars wide but there are wide spots and shoulders for cars to pass.  Traffic is very light.  This photo is near 11,000 ft elevation and there is essentially no plant life. 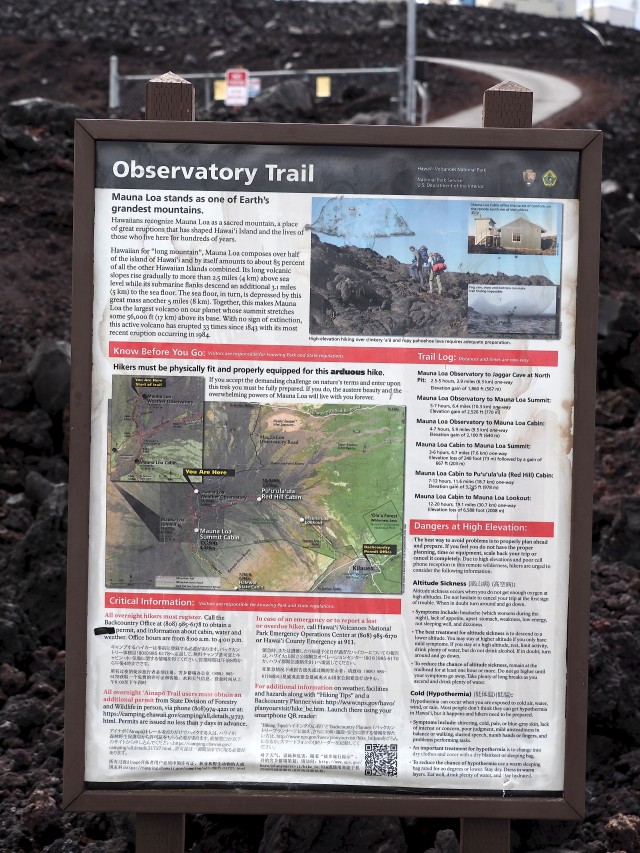 A trail starts at the end of the road and this sign describes it.  It is arduous, going from 11,000 ft to 13,600 ft.  Fortunately, for those prepared, there is a cabin with bunks at the top to sleep in.  Reservations required!