Here we provide suggestions, with our own biases, of how to efficiently see the natural environments of the Canary Islands.

As any vacation will involve compromises of time and money, we have suggestions for how to accomplish this.

Which Islands to Visit?

During our two trips to the islands we visited the same four islands.  This wasn’t random.  We had read about all of the islands and studied information about the flora and especially the succulent plants.  Each island has unique plant species and different landscapes.  However, the topography of each island is quite different.  The islands that  extend well above the stratus cloud layer (like Tenerife and La Palma) have moist laurisilva forests on their upwind side and dry-ish pine forests above.  The lowest islands like the eastern two, Fuerteventura and Lanzarote, have no high altitude areas only a few peaks that barely reach the low cloud layer (on some days).  Thus they lack laurisilva and pine forests.  The islands that extend to or just above the tops of the low cloud layer like La Gomera, Gran Canaria and El Hierro, have pine and laurisilva forests to varying degrees but lack the higher altitude landscapes.

For the enjoyment of the natural history traveler, as important as the natural factors, are the logistics of getting around on each island.  This is determined in large part by the population on each island.  This is the reason we have not traveled to Gran Canaria.  Gran Canaria and Tenerife have similarly large populations (almost 1 million each) and this affects the traffic on all roads on these islands.  However, the lack of active volcanic landforms and laurisilva forest on Gran Canaria counted against our planning a visit to Gran Canaria.  Small population islands like La Gomera and El Hierro have lighter traffic and uncongested towns, facilitating travel around these islands.  This led to our decision to visit these islands, despite their lack of high altitude landscapes like Tenerife and La Palma.

Although we have not visited the low and dry islands of Lanzarote and Fuerteventura, these do have some interesting natural landscapes, including relatively recent volcanism on Lanzarote and a steep escarpment on the southern part of Fuerteventura.  But few protected/semi-pristine areas remain on these islands.  Given that travel to these islands is more time consuming by ferry or aircraft, we chose not to visit them and instead invested more time on the four islands we selected.  Interestingly, after our first visit in 2014, we chose to return to these same four islands in 2018, despite our having flexibility to choose differently.

In summary, if you have only time for one island it might be Tenerife or La Palma for the diversity of environments.  But La Gomera and El Hierro excel for relaxed accommodations, ease of travel, and their excellent trails and moist environments.

Although most “package” tourists stay at larger complexes near the ocean with convenient access to restaurants, pools and other facilities, there are accommodations all over each of the islands.  However conventional hotels are almost entirely lacking on the smaller islands of La Gomera and El Hierro.  Even on the larger islands, hotels away from the resort areas are not common, and are mostly in the major towns.  Large hotels have some advantages, but a major disadvantage is that they don’t usually have full kitchens, forcing you to be dependent on restaurants – difficult to find or inconveniently located on some islands, and with siesta closures.

Fortunately, there are better options for naturalists who might want to be closer to nature.  Casas rurales – country houses, are widespread on the different islands and often much closer to where you might want to be early in the morning or late in the day.  But selecting carefully your casa rural you can minimize driving times to some natural attractions or minimize your driving on heavily-traveled roads.

An example is worthwhile to show how you can minimize traffic while visiting attractions.  Suppose you decide to spend several days exploring the high altitude parts of El Teide National Park.  Where should you stay to minimize the daily grind of heavy tourist traffic to this area?  Consider the map below.

The heavy red circles in the southwest corner of Tenerife are where the large tourist resort communities are found.  There are some resorts elsewhere, but the largest concentration is in this area.  A certain percentage of these tourists will want to visit the El Teide area on a given day.  Many/most will take the shortest route (though not necessarily the fastest route – see google maps for travel times), shown very schematically here by the red curve with arrow.  The detailed routes vary, but are roughly in this sense.  IF you decide to stay at a casa rural near Santiago del Tiede you will follow the road indicated by the dashed black curve.  This route has much less traffic because it doesn’t come from an area with large numbers of tourists.  Yet the road is good (with fewer sharp curves than the route from the resorts), the views scenic, and it ultimately arrives to the same area of the El Tiede National Park.

The Santiago del Tiede location has the additional advantage of being close to lausisilva forest in the Teno area and some natural areas in the Teno Regional Park.  This is a longer drive from the resorts (but not so long that the crowds don’t eventually arrive later in the day).

The downside to the area around Santiago del Tiede is that it is higher in elevation (closer to 1000m, 3300 ft) and usually windy.  There are low clouds and fog on the mountains – which is why the laurisilva forest in found here.  The result of these conditions is that it is cooler and less sunny here – and can be cold in your accommodations!  We stayed in a small town (Erjos) within walking distance of laurisilva trails on both of our trips and it was cooler (in June) than we preferred.  But the benefits to the natural history traveler might exceed the drawbacks.

The plus side of the resort areas, besides the amenities and warmer weather, is that there are nice areas of dry scrubland close by. 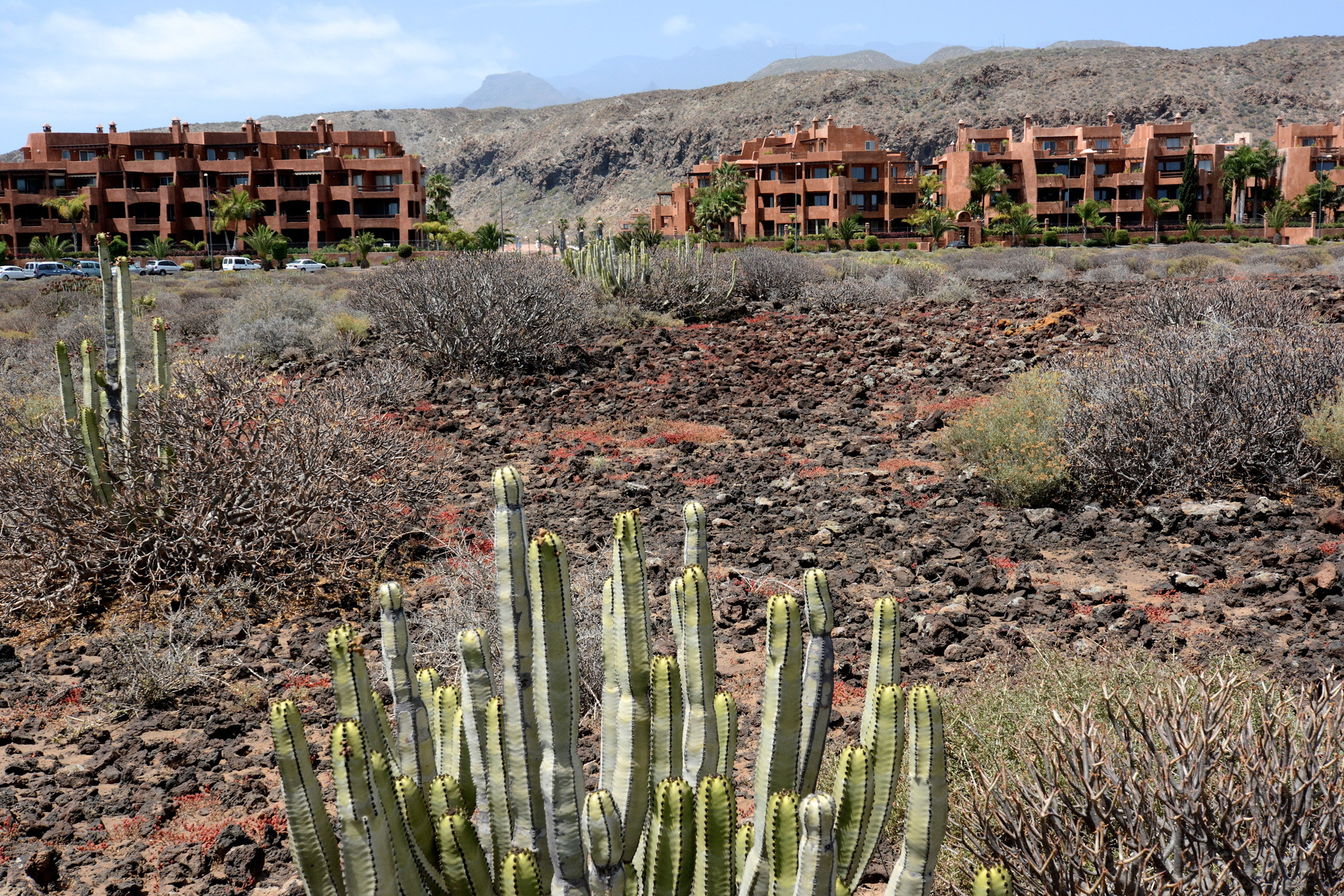 Euphorbia canariensis scrub along the coast near the resort area of Los Cristianos.

How to travel between islands and travel within each island

Most tourists visiting the Canary Islands do so on packages; the accommodations are concentrated on the south and east sides of the islands in locations with sunnier and warmer weather.  These visitors stay in clusters of mega-resorts – making the Mexico resorts of Cancun or Los Cabos seem small by comparison. These visitors often do not travel to other islands – and a few might not even leave their resort complexes.

Visitors wishing to travel to other islands can do so via aircraft or via ferry.  There are two main ferry companies (Fred Olsen and Naviera Armas) that connect all of the islands.  This is how commercial products and many locals travel since the ferries are lower than the flying costs. Fast ferries (about 40 knots) travel between the different islands, usually one to several times a day. (As a reminder for the non-nautical naturalist,   a nautical mile was defined as 1 minute of arc of latitude.  Thus 60 nautical miles is a degree of latitude.  Unfortunately, the Earth isn’t quite a sphere so this definition was only approximate.  A nautical mile is now defined as 1852m.)  The relatively remote El Hierro has less frequent ferry service.  All of these ferries transport vehicles, including large trucks.  If you have a vehicle you wish to keep during your entire stay you can travel via ferry.

Although we traveled via ferry between the islands during our 2014 visit, we discovered by 2018 that flying between the islands was more convenient.  For example, some of our ferry arrivals in 2014 were late at night and we were forced to drive to our rental houses well after dark – arriving near midnight over unfamiliar roads.  The flights in 2018 were generally convenient, scenic, and arrived with enough daylight to drive to our destinations before dark.

Rental vehicles are available at all of the ferry terminals and at all of the airports, so we found it more convenient to rent a separate vehicle on each island.  There is no need to keep the same vehicle and transport it to the different islands.  These secondary airports and ferry terminals are very uncrowded compared with mainland European airports, as most holiday tourists staying at the mega resorts travel in and out of either the Tenerife South or Gran Canaria airports.  We do suggest paying attention to the flights to your various destinations, especially on Tenerife as there are two principle airports on this island, separated by an hour’s drive.  This may affect your rental car return location.  Tenerife Sur (south) has much less vehicle congestion than the airport at Santa Cruz (north) but many of the flights to other islands depart from Santa Cruz.  The airports on La Gomera and El Hierro were very small and the one at La Palma was only slightly larger.

Time of year to visit

Although any time of year is good to visit the islands, there are some aspects that favor one season over another.  Spring is best for wildflowers, since normal rainfall occurs during the winter months.  Summer is considerably warmer and is dry on the lee sides of the islands – though low clouds are prevalent on the windward side of the islands. The tourism peaks – July/August and January/February should be avoided (if possible).  Statistics for tourism to each of the islands can be seen here.

Our specific comments regarding each island we have visited are under the following pages:

Back to the Introduction