Here I describe some important “local” factors that will influence the cloudiness on eclipse day, and will also help to explain the satellite climatology of the previous section.  These factors include:

Mountain/valley breezes (or print version here) and the daytime cycle of cloudiness in mountainous areas are shown in the two images below.  They show two examples of “ideal” daytime cloudiness over the Riverton region in Wyoming where the eclipse will be total (blue line is the eclipse centerline, red lines indicate the bounds of totality). 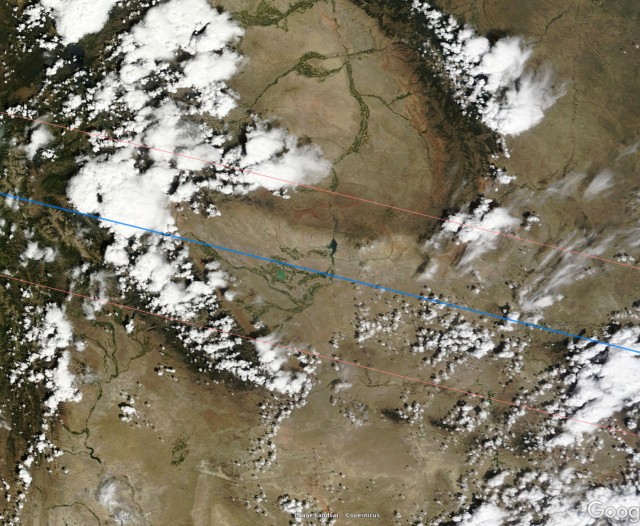 These images are individual MODIS images from different years/days in August.  They show “typical” cloudiness patterns around mid-day associated with valley breezes (winds from the valley towards the higher terrain).  Riverton, Wyoming is just below the center of the images.  Note that cloudiness is a minimum over the low-elevation basins and greatest over the surrounding mountains.  This is due to sinking motion over the basins and rising motions (leading to condensation and cloud formation) over the mountains and slopes during the daytime.  Use this basic understanding to predict mid-day cloudiness over the intermontane west.  Again, click on the images for a larger view and note the eclipse path and centerline (blue line).

Below is a shaded relief map of the southern Appalachians and the corresponding mean daytime cloudiness from the Terra and Aqua imagery for the July-Sept period.  Note the very close correspondence between the mountain peaks and ridges and the higher cloud amounts, with the least cloudiness in the valleys and on the surrounding relatively flat terrain.  Be sure to click on the images for larger versions. 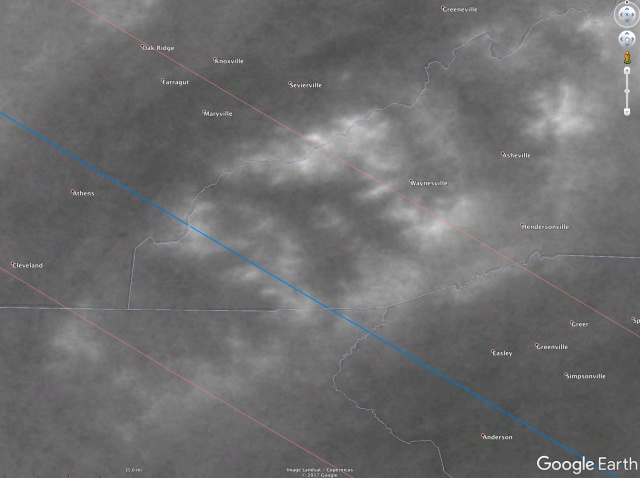 A closer view of the same area is below – again note that the minimum cloudiness will be in the valleys, with maximum cloudiness over the higher terrain.  Click for larger versions – these might be useful for site selection.  Of course it is better still to use the kmz files provided in the previous section.  Note the eclipse centerline in blue… 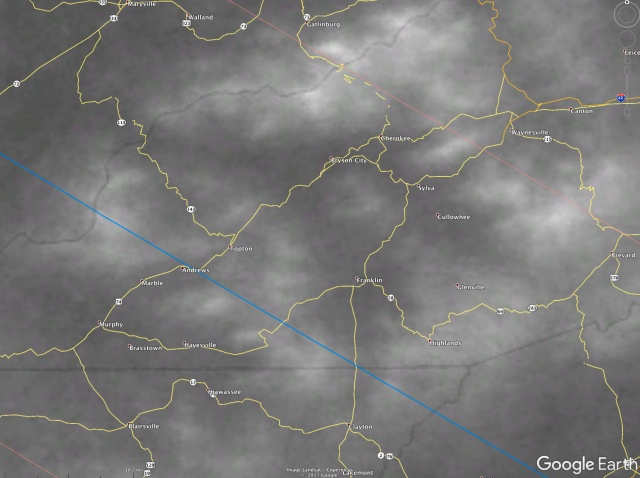 Another example is seen in the animation below.  Here the Rio Grande River valley (the approximately north-south dark wiggle) is mostly cloud-free early in the day.  Clouds, some from storms forming over surrounding mountain ranges, eventually cover the valley, but late in the day compared with the surrounding areas.  The brighter white area in the lower part of the images is White Sands – gypsum dunes near Alamogordo, New Mexico.  High clouds from storms to the west cover the dunes – but very late in the day.  Of course, this example is to illustrate the importance of mountain-valley breezes, the total eclipse will not pass over this region.

Visible image animation on July 10 2017 showing most of New Mexico area.  Clear conditions initially in the morning, with clouds developing first over higher terrain with broad valleys mostly cloud free (initially).  Over the Texas panhandle clear skies are replaced by cumulus clouds in afternoon – but these dissipate near sunset (typical diurnal cycle of cumulus over flat land).

Sea-land breeze circulations (print version here) and their modulation of daytime cloudiness (important for South Carolina and Oregon coastal areas).  The three images below depict the impact that three small lakes on the coastal plain of South Carolina can have on the daytime cloud field during a summer day.  This day had weak winds at the surface.  The lakes are circled – they fall on the centerline of the August 2017 eclipse.  Note that cloudiness is a minimum over the lake at both the morning and afternoon satellite image times.  I have also indicated the influence of the sea-breeze in reducing cloudiness just offshore and also over the immediate coastal strip.  This clear zone progresses inland during the afternoon.  Be sure to click on the images to see more details.

The implication here is that the best place on the South Carolina coastal plain to see the solar eclipse in August 2017 (from a cloud climatology perspective) is along the shoreline.  Next best locations would be along the shore of one of the lakes – but this depends on the wind direction, as will be shown below. 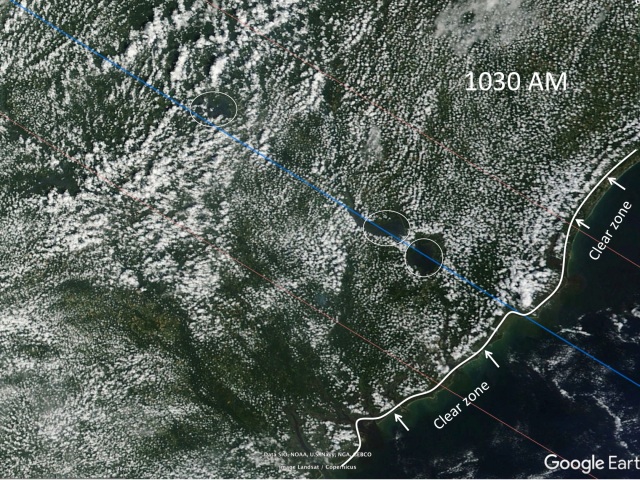 The three images above depict the impact that three small lakes on the coastal plain of South Carolina can have on the daytime cloud field during a summer day.  This day had weak winds at the surface.  The lakes are circled – they fall on the centerline of the August 2017 eclipse.  Note that cloudiness is a minimum over the lake at both the morning and afternoon satellite image times.  I have also indicated the influence of the sea-breeze in reducing cloudiness just offshore and also over the immediate coastal strip.  This clear zone progresses inland during the afternoon.  Be sure to click on the images to see more details.

Another example from July 12 2017 showing the 130pm cloudiness along the South Carolina coast.  The coastline is almost entirely clear, and the downwind side of the two larger lakes (Lakes Mountrie and Marion) is also clear.  Knowing the near-surface wind direction on the morning of the eclipse over the coastal plain of South Carolina will help you decide which side of the lake to position yourself on.  (Downwind side of lake will be more cloud-free than upwind side).

This lake-induced downwind suppression of cumulus clouds can be seen on July 14th 2017 in the animation below.  The wind is initially from the west-southwest, becoming more southwest by the end of the look.  Thus, the wind direction needs to be monitored closely to anticipate the expected location of the downwind cloud-free “wake”.  Naturally, on this particular day, the beach would be the most assured location for cloud-free skies.

Where do you find the latest hourly forecast winds for the location you want to be at?  Go to the NWS site:  http://www.weather.gov to get something like this:

Then click on the part of the country you are at, in this example South Carolina, to get: 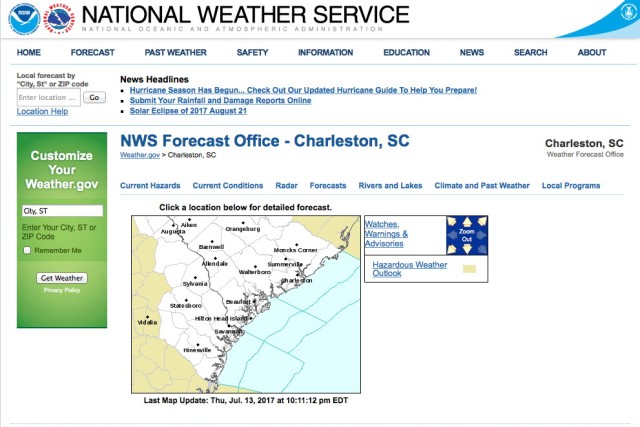 click again on the specific part of this forecast area (overseen by the forecast office in Charleston):

Here, I clicked on the area between the two lakes mentioned above.  The green square indicates the forecast location.  This is generated automatically for any place in the US from gridded forecast products.  Completely automated.  Now you can scroll farther down the page to see something like this:

As I indicate above, click on the plot in side the red box (I put the box there!) to get something like: 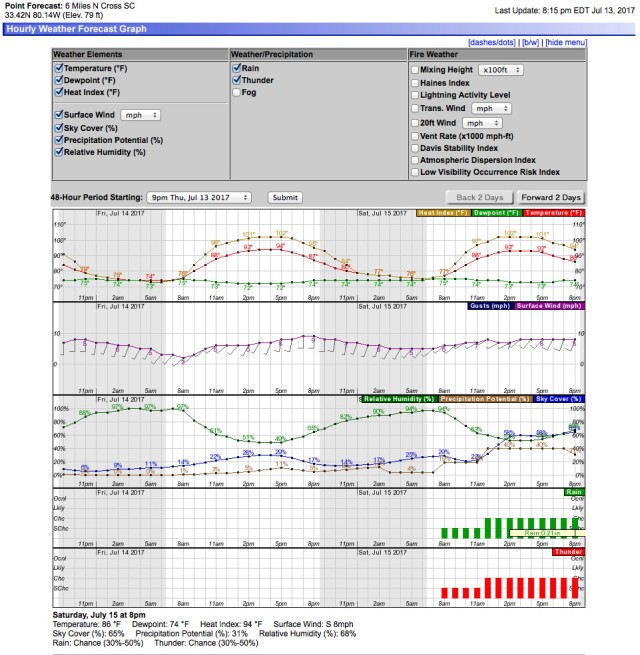 NOW, you can see the forecast temperatures, winds, humidity, cloud cover etc hour by hour, for days in advance.  In this example, the winds are all from the south or southwesterly direction (this is how winds are plotted).  They are also weak, 5-10 knots (10 nautical miles per hour is close to 11.5 mph).  Study this plot days in advance, so you can interpret it quickly and easily.

Sorry for the long-winded explanation, but if you want to predict the sea-breeze or lake-associated cloudiness and where is will be just before the eclipse starts  – you need to know how to find the forecast surface winds.

Below is an idealized wind pattern around a nearly-circular lake close to the centerline in Wyoming.  The skies over the lake would most likely be cloud-free, all other factors being equal.  For a small lake like this however, these lake breezes are quite weak – it is the cool lake surface that dampens the development of convective currents (the form cumulus clouds when moisture is present).

White arrows indicate idealized daytime surface winds in the absence of any large-scale wind flow.  Sinking motion would occur over the lake and would be compensated by rising motion over the land.  This is Ocean Lake in Wyoming (about 3 miles across), near the centerline of the eclipse and might be a good location for minimal cloudiness and minimal turbulence (cool lake surface would minimize turbulence  due to lack of surface heating).  There is actually a campground on the peninsula extending into the lake.

This section is not too relevant to the August 2017 eclipse, as there are few really large lakes along the path of totality.  However, several lakes on the South Carolina coastal plain near Charleston and Columbia do show these effects under weaker wind conditions.   The lack of wind is key, because temperature differences between the lake surface and the surrounding land generate lake breezes (and by mass continuity considerations requires sinking motion over the lake and thus clearer skies).  Also, independent of the presence of such lake breezes, cumulus cloud formation will be less over a relatively cool (lake) surface than the surrounding land – at least during a warm summer day.  If there is strong wind, the temperature difference between the land and lake will be nearly eliminated, reducing both of these effects.

To illustrate the lake effects during the summer look at the examples below for the Great Lakes region.  Again, the same processes can be seen in much smaller lakes – but only under weak wind conditions (as discussed for South Carolina previously in this section).  Note that the coastal area exposed to air flowing off the lake will only show cloud development well inland from the coast, while the coast subject to air flowing off the land will have greater cumulus development – essentially not feeling the effect of the lake’s cooler surface.  This, knowing the surface wind forecast is crucial to identifying which coast of the lake will have less daytime cloudiness. 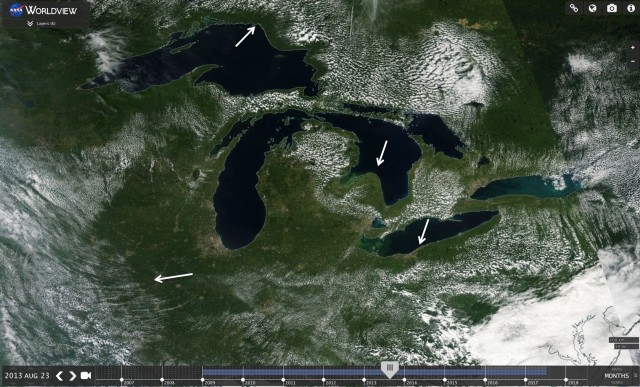 Surface winds schematically depicted by the white arrows.  Clouds develop well inland when the air flows off the cooler lake surface.  Clouds can be over the coast when the airflow is off the land.  You need to know the wind direction at the surface to locate the side of the lake that will have the least cloudiness at the eclipse time. (Of course the Aug 2017 eclipse totality path will not go over this region – we are showing this only as an good example of how the relatively cool surface of lakes effects daytime cloudiness.)

A closer view of this effect over southern Lake Michigan is below: